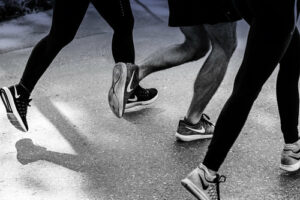 I have been a runner for about 6 or 7 years and have been really lucky with injuries. I did suffer from a few typical injuries for those beginning running at the outset in 2011 when I was training for the London Marathon, however the Jersey Sports and Spinal Clinic were there to help and keep me on the road.

Fast forward a few years, numerous miles and challenges later and I have found myself in a bit of a rut in 2017 – 2018. I know what I am capable of running wise but for reasons unbeknownst to me I have really struggled in this time period with my running, so much so that in the latter part of 2018 I had really started to cut back the number of miles I was doing as I was finding it all such an effort and not really getting much out of running.

I have always had a great relationship with the guys at JSSC and have never hesitated to recommend them to people who have suffered injuries through running as I really believe, they are there to keep people on the road and running wherever possible and really do walk the walk as well as talking the talk. I had heard about the running S&C course and was curious as to what it was about. I have to say I have never really been a fan of exercises or strength work and I think Lisa will attest to this  but I was at a loss as to why I was struggling so bad so thought the course sounded good.

After signing up I had an appointment with Lisa Mann who gave me some tests to assess the strength of my key running muscles: The Glutes, Calves, Hamstrings and Quads if I recall correctly. The tests themselves were performed with a machine that records force exerted, which for me as a stats geek was really interesting as to be able to quantify where you were at and to then identify and imbalances or weaknesses really appealed to me. The test results were indeed very interesting and highlighted quite a few areas to work on, which was great to know.

So forward to day one of the course and I arrived to the gym room with 8-10 other people and Kyle and Nigel put us through our paces for approx. one hour – the room was set up in stations with each one targeted to work on specific running related strength areas. I really liked the fact that they had notes of how we had performed on the treadmill in the initial tests and had coaching points for us to focus on as we ran. The session was hard and I realized just how lacking I was in certain areas of leg based strength for sure! I hobbled out of the room at the end and my legs were like jelly, which I think is the sign that you have definitely worked hard! The following morning I have to say I felt ok, but on the Saturday morning I recall waking up and definitely feeling the session in all of my lower body!

Over the 8 weeks the sessions were based on the same station like format with different exercises each week targeting the same areas. I found it to be challenging but Nigel and Kyle were encouraging and helped us to push it and get the benefit. As we got to week 4 or so I felt a definite improvement in my leg strength which knocked on to feeling stronger, quicker and running with better form. I concentrated on repeating the coaching points as I ran as well as also doing additional sessions during the week with resistance bands to get the max benefit. I have to say that now at the end of the course having gone to 7 of the 8 sessions I have noticed a massive improvement in my overall leg strength and running form, and most importantly for me I am not struggling as much when I run and really feel like the “old me” is in there somewhere maybe.. I know I still have a little way to go but I have signed up to the next course to ensure that I maintain the continuity and get a good base of strength going into 2019. I wopuld not hesitate to recommend this course for anyone who runs who wants to get a little quicker, stronger or just to prevent any injuries down the line. Thanks to JSSC for getting me back on the road and enjoying my running again!

← How Many Steps Did You Manage Today? Mission Accomplished! →